Teal Group gathers, classifies, and analyzes information from a wide range of sources. Our analysts publish News Briefs several times a year. Subscribe via email to receive each News Brief when it is published

Get News Briefs Delivered Via Email

Europe Introduces Unified Civil UAS Regulations to Catch Up to the U.S. 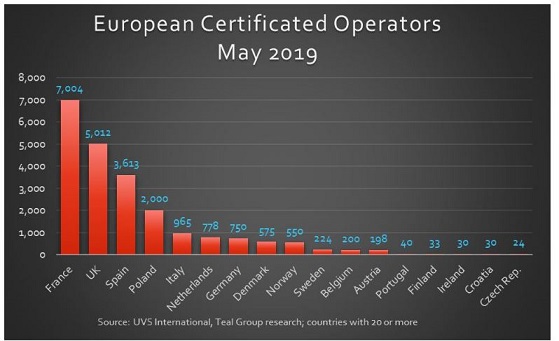 Europe is introducing new unified regulations in an effort to replace what had been a fragmented market.

Following a six-month delay over original  plans due to the pandemic, national UAS regulations in European Union Member Nations will be replaced by a common European Union regulation beginning in 2021. The transition to the new regime will end at the beginning of 2023.

The new European regulation established three categories, which are based on risk.  In the easiest ‘open’ category UAS operators with less operational risk can carry out an operation without authorization. The second ‘specific’ category is a category of UAS operation that, considering the risks involved, requires an authorization by the authority before the operation occurs that considers the mitigation measures identified in an operational risk assessment. The third ‘certified’ category includes unmanned operations that, considering the risks involved, requires the certification of the UAS, a licensed remote pilot and an operator approved by the competent authority, in order to ensure an appropriate level of safety.

The goal is to enable the creation of a single European market in which pilots and equipment can move freely to perform work rather than being forced to deal with varied national regulations.

For years, many individual European countries were ahead of the United States in allowing the use of UAS for commercial purposes. Some countries like France allowed even beyond visual-line-of-sight operations in certain circumstances.

Until the unified regulations go into effect, Europe does not have harmonized regulations for UAS smaller than 150 kg. The lack of final UAS rules has presented problems for companies seeking to invest and develop business cases to address the European commercial market. Manufacturers need to be able to understand what systems will be allowed to operate in individual European nations. European service providers need to be able to ensure that they can operate across national boundaries.

At least 21 of the individual nations of the European Union have established their own rules for drone operation. United Kingdom, France, Italy, Germany, Netherlands, Spain, Sweden, Austria, Denmark, Czech Republic, are all allowing flights of small UAS in their airspace for commercial operations. These are generally restricted to line-of-sight operations of small UAS. Non-EU members Norway and Switzerland are also in the forefront of establishing rules for UAS.

Yet regulations vary widely between the countries. France, Norway, and Spain allow beyond line-of-sight operations, but most countries do not. Denmark is known for having particularly liberal regulations.

France has been in the forefront of the development of commercial UAS rules. French regulators adopted a risk-based approach very much, considering the risk of UAS based on joules of energy rather than just its weight.

Yet overall, the relative balance shifted toward the United States because of its significantly larger market.

There was also an imbalance of funding that favored American drone companies. Since 2012, US startups have received more than seven times the venture capital funding of European companies, according to Teal Group’s research. As a result, that became an additional motivation for some European companies to move portions of their business or their headquarters to the United States.

In a reflection of the different operating environments, the number of US operators has soared past that of Europe. Regulations do differ on what constitutes an operator in different countries in Europe and the United States, so the figures are not entirely comparable. Still, the limited numbers available show that the United States is surging ahead of Europe in UAS operations.

As of August 2020, the FAA announced that there are a total of 1.68 million drones registered in the United States, of which 484,000 are drones for commercial operation. In addition, there are 188,395 Remote Pilots Certified.

By comparison, in January 2018 that there were 122,000 commercial, public, and  other  drones,  which  are individually registered.

The  numbers  of  operators  in  Europe  are  growing  rapidly, but  not  as rapidly as in the United States.

UAS  adoption rates vary considerably in Europe.  While overall  figures are difficult to compile due to the large number of countries and limited  information provided by national authorities, the information available suggests that the number of commercial UAS operators now reached approximately 21,243 operators in May 2019, according to UVS International, Europe’s leading UAS association. That is up from an estimated 16,034 certificated civil UAS operators in Europe in June 2017 and 13,720 at the same time in 2016.

These are generally very small companies working to establish  the commercial viability of using UAS for different applications. Almost all of them are using systems with 15 kg or less weight.