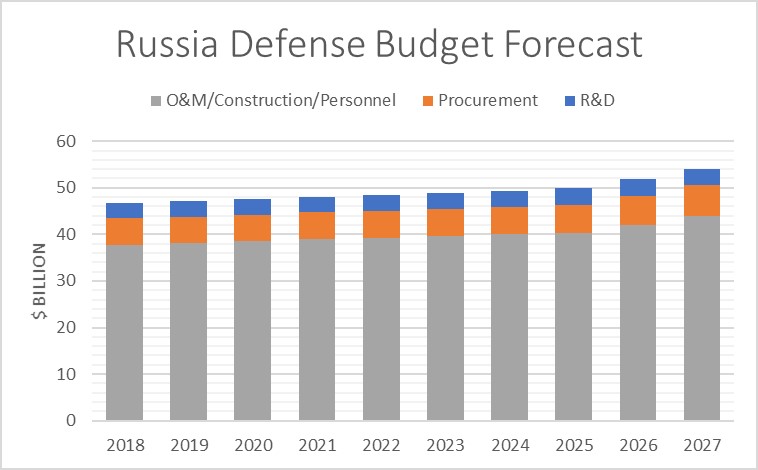 Russia is still attempting to recover from the tumult of the 1991 dissolution of the Soviet Union. In contrast to the former Warsaw Pact countries such as Poland and the Czech Republic, Russia suffered from a far more serious and prolonged economic crisis, which in turn undermined attempts at military and industrial reform. This abated in recent years both due to an upturn in government revenues from oil exports as well as a rationalization of the tax system which has stabilized government revenues. Indeed, there has been enough of an increase in defense spending that the government announced some small but significant procurement efforts starting in the 2005 budget and continuing through the 2015 budget.

These plans came to a crashing halt due to the fall in oil prices combined with US and European sanctions against Russia for its military actions in Crimea and eastern Ukraine. The 2016 budget fell by 10% as a result of the oil drop to R3.1 trillion. At the end of 2016, the government announced plans for further drops in 2017 to R2.87 trillion and 2018 to R.2.77 trillion. Current plans expect a rise back to R3.06 trillion in 2019.

Russia has been unable to devote the large fraction of the GNP to the military as in the Soviet days, and the resulting collapse of the defense economy in Russia in the 1990s has been a central factor in the current economic depression plaguing many regions of the country. Russian industrialists had hoped that extensive defense exports would assist in stabilizing the industry, but this has not proven to be a solution. Russian defense exports in recent years have been healthy, but not enough to bolster the industry beyond bare subsistence. Indeed, there have been repeated signs of the decay of the industry with customers complaining about high costs and poor quality; Algeria returned a batch of MiG-29 in 2008 due to quality issues.

The industrial problems have been exacerbated by government acquiescence to parasitic extraction of value out of the industrial infrastructure by regime cronies. This has been especially serious in the Moscow area where escalating real estate values have encouraged government bigwigs to take over the property or design bureaus and factories and convert them to more lucrative housing and business projects.

The crunch between the high demands of reconstructing the defense infrastructure, and the need to keep at least a part of the defense industry alive is posing a major problem to Russian military leaders. It is a challenge they are finding impossible to meet for political as well as financial reasons. Reorganization has tended to be belated and as a result has not been well controlled.

The Russian seizure of the Crimea and the Russian-backed insurgency in eastern Ukraine in 2014-15 led to series of western economic sanctions. This has also impacted the defense industries since Russian plants were dependent on Ukrainian facilities for some key sub-components such as helicopter engines and naval engines. Coupled with the current oil glut, the Russian ruble has plunged in value and Russian credit ratings have descended into the "junk bond" ratings. The budget presented in the chart is based on direct exchange value; “purchasing price parity” estimates of actual Russian defense spending would be higher. Given the roller-coaster ride of the past few years, any forecast is highly speculative. 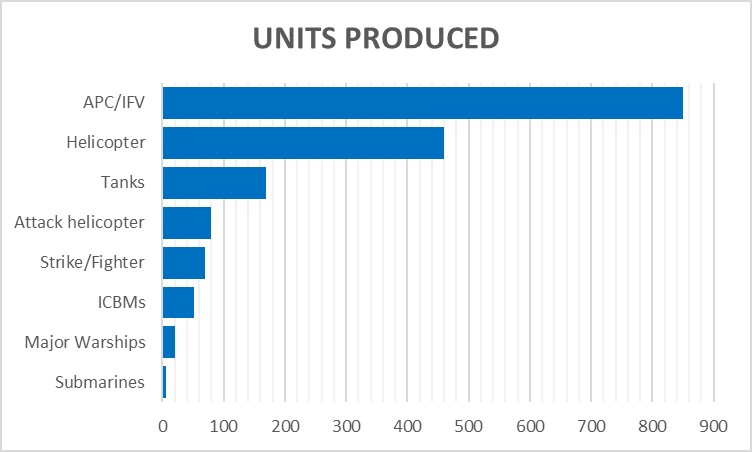 Steve assumed responsibilities for the World Missiles & UAVs Briefing during the summer of 1993. He also developed and maintains the International Defense Briefing, and is co-author of our annual sector study, World Military Unmanned Aerial Systems Market Profile & Forecast.