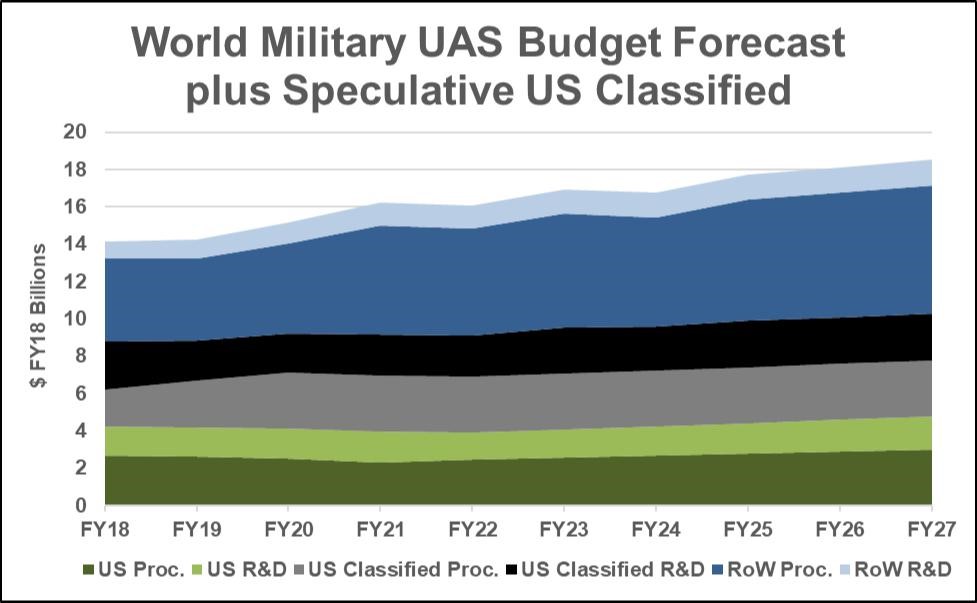 In terms of worldwide military budgets, the unmanned aircraft systems (UAS) segment promises to be one of the most dynamic growth sectors, continuing the past decade’s rapid spending growth. The unclassified sector will continue to increase over the next decade, by about 36%, from current annual spending on RDT&E and procurement of about $9.6 billion in FY18 to about $13 billion in FY27. If operations and maintenance expenditures were to be added, these totals would be even greater.

This future military growth is being driven by the adoption of unmanned aerial vehicles (UAVs) worldwide. Over the next decade, US procurement will grow modestly. Growth will increasingly shift towards international markets as more militaries adopt the lessons of Iraq and Afghanistan and incorporate UAVs into their forces. The introduction of specially built unmanned combat air vehicles (UCAVs) also promises to drive growth over the next decade.

Now, for the second year Teal Group has separated all civil government and commercial UAVs into a separate study in recognition of the strong potential for the future as airspace begins to open worldwide. We have included a brief summary of those findings here. Please note that in our tables and charts “procurement” and “production value” are two different, but related numbers. Procurement, covered in the budget forecasts here, represents the annual amount of production funding included in a particular country’s annual defense budget, usually on a fiscal-year basis.

The most significant catalyst to this market has been the enormous growth of interest in UAVs by the US military, tied to operations in Iraq and Afghanistan, as well as the general trend towards information warfare and net-centric systems. UAVs are a key element in the intelligence, surveillance and reconnaissance (ISR) portion of this revolution, and they are expanding into other missions as well with the advent of hunter-killer UAVs.

Our research suggests that the US will account for 57% of the unclassified R&D spending on UAV technology over the next decade, and about 32% of the unclassified procurement through the forecast decade. These US UAV funding shares for R&D and procurement represent smaller shares of the market compared to defense spending in general. The US accounts for about 64% of total worldwide R&D spending and 38% of procurement spending, according to Teal Group’s International Defense Briefing forecasts.

These percentages change significantly when adjustments are made for US classified UAV development and procurement funding. The value of these “black” programs can only be surmised, with our estimates serving as a likely upper end of the range of potential secret monies. With these assumptions, the US accounts for 76% of the world R&D on UAVs and 49% of the procurement.

This difference is due to the heavier US investment in cutting-edge technologies and the marked lagtime in such research and procurement elsewhere, especially major aerospace centers such as Europe. This follows trends in other cutting-edge technologies observed over the past decade by Teal Group analysts in such areas as precision-guided weapons, information and sensor technology, and military application of space systems.

A tangible example of the “black” UAV budget in the US is the RQ-170 Sentinel program which only came to light when one of the stealth drones came down in Iranian territory. If our funding forecasts for "black" classified programs are removed, the US share for RDT&E falls to 57% and for procurement to 32% of the world share, which is incongruous in view of the leading role played by the US in RDT&E and procurement in the UAV field, and the general trends in world defense spending mentioned earlier.

Teal Group expects that the sales of UAVs will follow recent patterns of high-tech arms procurement worldwide, with the Asia-Pacific area representing the second largest market, followed by Europe. Indeed, the Asia-Pacific region may represent an even larger segment of the market, but several significant players in the region, namely Japan and China are not especially transparent about their plans compared to Europe. As in the case of many cutting-edge aerospace products, Africa and Latin America are expected to be very modest markets for UAVs.

Some warnings are needed when viewing the forecast. There appear to be wide swings and dips in unit acquisition over the forecast decade, that is not matched by similar swings in the production value. This is primarily due to the volatile mini-UAV market, which represents very large numbers of air vehicles even though unit costs are extremely low compared to other UAVs, especially the endurance types. This forecast expects a drop in US mini-UAV acquisition as combat operations wind down in Iraq and Afghanistan, which has a significant effect on unit numbers, though not on dollar values. It is also important to note that we are not yet including forecasts for quadcopters, or very small and inexpensive micro-UAVs, since the numbers tend to grossly distort the unit forecast numbers.

Steve assumed responsibilities for the World Missiles & UAVs Briefing during the summer of 1993. He also developed and maintains the International Defense Briefing, and is co-author of our annual sector study, World Military Unmanned Aerial Systems Market Profile & Forecast.