Teal Group gathers, classifies, and analyzes information from a wide range of sources. Our analysts publish News Briefs several times a year. Subscribe via email to receive each News Brief when it is published

Get News Briefs Delivered Via Email 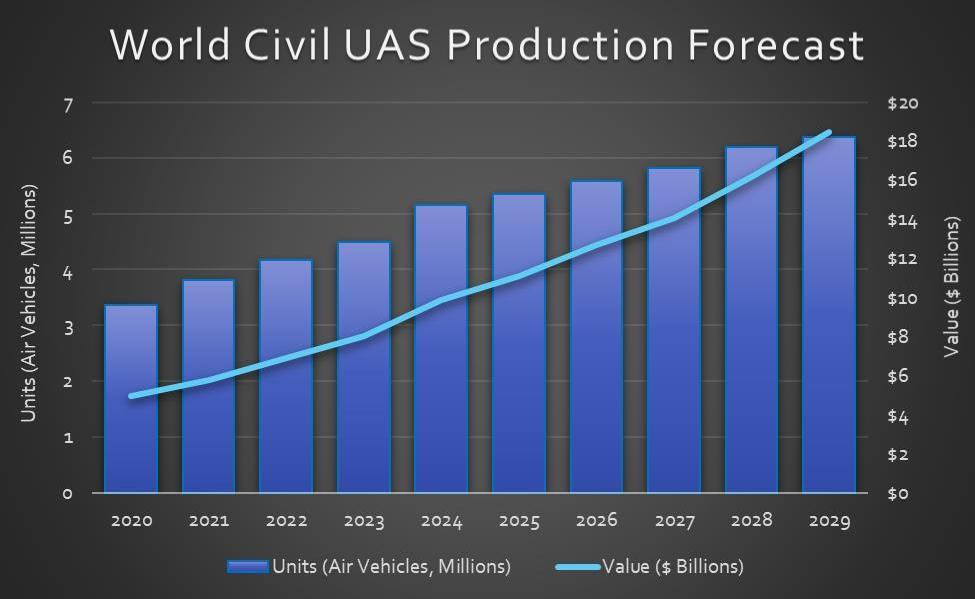 Consumer UAS will continue to grow but its most explosive growth is behind it. It is a much more mature market that has lost some of its novelty and technological innovations that will attract buyers are becoming fewer. Still, the market will continue to expand for several more years thanks to new technological developments and a wider range of product offerings. Moreover, there promises to be considerable crossover between the consumer and the commercial UAS markets. Some consumer drones are used for low-end commercial tasks such as real estate. Consumer drone manufacturers are also moving up the value chain to create more capable, complex systems able to take on more demanding commercial work. Consumer systems are reaching the saturation point in the United States and Europe by 2024.

The battle for the consumer drone manufacturing market is over, with China’s DJI Innovations dominating the market.

Yet the market in commercial drone manufacturing, services and analysis are still up for grabs.

A monumental battle is shaping up as US, European and Asian companies expand to be in a position to compete worldwide in systems and services to address this market. The drive for scale has begun as mergers and acquisitions nationally and across borders accelerate.

National and regional advantages are emerging as the worldwide industry develops.

The United States is the clear leader in analytics and the development of service offerings. Tremendous interest by technology leaders such as Intel Corp., Amazon, Face-book, Google, Sony, Verizon, Mitsubishi, General Electric Co., Microsoft, Apple and Samsung is adding to the speed of development by providing financing and an infusion of new technology and talent. Major technology firms such as Intel, Microsoft and Qualcomm are working to apply their technologies to making drones effective work tools.

An infusion of venture capital is creating an industry of startups in both manufacturing and the services that will be critical to development of the commercial market. Two-thirds of the venture capital money worldwide is going into the US drone industry.

They also have an advantage in their analytical capabilities which generally are well above competitors. In many cases, US companies are working with Chinese drones to give them the capabilities to perform inspections. As a result of this analytical advantage, China’s DJI often work with US analytical companies that can process and analyze the data produced by DJI’s UAVs.

China’s clear advantage is in manufacturing. The nation is seeking to expand from dominance in consumer UAS manufacturing to leadership in commercial UAS. Government and industry are working together to build their country’s market presence in agricultural and delivery drones in particular, two of the largest potential sectors in the future. Yet other Chinese companies are working to move into drone production for specialized inspection areas such as powerlines and wind turbines.

Despite vocal support from the Japanese government, Japan is falling behind China. Japan emerged as an early leader in civil UAS development thanks to an unmanned agricultural spraying industry that dates back three decades. Japan’s most promising potential areas to play a role in the worldwide UAS industry come in agricultural spraying, smart construction work, and services. In each of those cases, Japan’s lack of manpower is driving national adoption of unmanned systems.

Europe has already ceded its early lead in drone market development to the United States and China. Europe is working to avoid being left behind by enacting standardized airspace rules that will create a single market. The European Aviation Safety Agency (EASA) is working to harmonize European national regulations by establishing rules for small UAS across the European Union be-ginning at the end of 2020.

European UAS firms are falling behind in this flurry of activity. They lack the strong venture capital funding and large, unified domestic drone market enjoyed by US firms. As a result, some European drone firms have either moved their headquarters or significant operations to the United States. The new EASA rules should go far to remedy this situation.

The worldwide drone market’s evolution is clear from venture capital trends. Increasingly venture capital funding is shifting from hardware to software and services that will make existing drones more useful.

Funding is being used to develop the business tools that are needed to quickly allow industry to develop scale, such as national networks of service providers and improved analytics to make UAS easier to use and more proscriptive. It is also going to the companies that will lay the foundations for access to airspace such as detect and avoid technology and unmanned traffic management.

Despite its promise for future growth, the current market is cut-throat. Market development is rapid, but a gap has emerged. While the market is growing, the massive number of startups and investments by existing companies has created capacity that outstrips the market. That is being aggravated by the impact of the pandemic.

A large number of drone manufacturers are pursuing a nascent market. Drone service prices have fallen rapidly to accommodate the large influx of providers, particularly in providing simple services such as real estate photography.

The industry shake-up will intensify in coming years. As companies are forced to evolve quickly to deal with intense competition, consolidation promises to accelerate in the industry. Teal Group anticipates that well over half of the companies now involved in commercial drones will be out of the market in five years. Some well-known companies are al-ready bankrupt, and more will follow in coming years. Others will be sold.